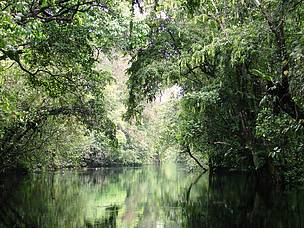 The tropical rainforest of the Guianas
© WWF Guianas
Lima – Peru The Amazon forest is the world´s largest tropical ecosystem (6.7 million km2), home to 34 million inhabitants, and 10% of the known biodiversity. This immense ecosystem covers 8 countries, one of them being Peru, considered the second country in the continent in extension of Amazonian forests (68,577,351 hectares), and home to 50 native towns. The department of Madre de Dios is located in this scenario of great biological diversity, variety of ecosystems and cultures. This territory has its own threats, which generate pressure on the forests, being the alluvial gold minning the one with the greatest impact.

The tropical rainforest of the Guianas
© WWF Guianas Enlarge