Posted on 23 noviembre 2022
The processes and mechanisms to fight illegal logging in Colombia, Peru and Bolivia, Ecuador were studied by the Alliance for Wildlife and Forests. This article describes the top five lessons learned from this study.
According to the Amazon Network of Georeferenced Socio-Environmental Information, the Amazon Basin is reaching a point of no return, given the high deforestation and degradation of its forests. Twenty percent of the Amazon forest—nearly 165 million ha—has disappeared in 36 years and 6% percent—54 million ha—is at great risk.

Governments and civil society groups in countries sharing the Amazon Basin have developed processes to promote legal logging. The strategies they have used include putting in place forest monitoring, control and surveillance systems; traceability systems to monitor timber products from the forest to the end-buyer, and national and regional platforms where actors in the forest chain get together to discuss and agree on actions to fight illegal logging in their territories.

In collaboration with government, civil society, private sector and international cooperation organizations, nine illegal logging fighting initiatives in Peru, Colombia, Bolivia and Ecuador were studied, to identify their challenges and lessons derived from the process. Five of the main lessons learned in the framework of the Alliance for Wildlife and Forests are explained in this article. They were also included in the webinar series Los desafíos de la madera legal en Perú, Colombia, Ecuador y Bolivia, held in August and September 2022.

For an Executive Summary of this exercise, see https://wwf.panda.org/wwf_news/?5274391/sistematizacionFLEGT
National and regional dialogue and agreement platforms have promoted relationships among actors in the forest chain, developed national capacities and helped identify similar problems among territories. For these reasons, dialogue in all countries should be sustained and strengthened. “The challenge of dialogue and agreement platforms is to get actors at all levels involved, from indigenous communities to civil society groups, to legitimize processes to fight illegal logging,” explains Hugo Carvajal, coordinator of the Forest Discussion Panel of the Colombian Amazonas Department.
Dialogue platforms are strategic collaborative multi-actor spaces that help governments understand what happens with illegal logging in their territories, promote knowledge exchange and develop appropriate policy and actions to fight this problem. Specialists have highlighted the value promoting dialogue within platforms and the convenience of including them in government plans and public policies because they can significantly influence high level policy. “Legal wood management platforms have contributed to increase networking, thus promoting knowledge sharing,” explains Alfredo López, coordinator of Public, Private and Community Alliances of CEFOVE (its acronym in Spanish), the Ecuadorean group of volunteer forest certification.
The same challenge applies to wood tracking systems in countries, where all actors in the forest chain, including national environmental authorities, should get together and dialogue. As explained by Nhaydú Bohórquez, a REDD+ and sustainable forest management expert at the Food and Agriculture Organization of the United Nations (FAO), “users of the Colombian tracking system along the forest chain should go beyond establishing a contact with a national environmental authority but engage in a dialogue among nearly 40 independent regional authorities.”
Some countries have tagging systems that allow monitoring wood products from the forest to the end-buyer, using a QR code and a cell phone, but many actors don´t know how to use this technology. “Capacity should be strengthened so that all actors can use these devices,” explains Manuel Salirrosas, forest specialist from SERFOR, the Peruvian Dirección General de Promoción y Competitividad Forestal y de Fauna Silvestre del Servicio Nacional Forestal y de Fauna Silvestre.
“Connectivity in remote territories should also be strengthened so that environmental authorities, private sector companies, and local communities that live from and depend on forests can be involved,” says José Luis Osinaga, former national head of Conservación y Manejo de Bosques de la Autoridad de Fiscalización y Control Social de Bosques y Tierra (ABT) in Bolivia. “National digital tracking systems are still weak as is the internet service in broad and remote regions. Working with forest actors is necessary to make tracking systems accessible to all forest chain actors and increase their participation in the forest sector,” adds Osinaga.
Follow up actions to reduce illegal logging are also necessary across country borders. Monitoring systems should be strengthened across country borders, where illegal trade occurs because of legal loopholes, or lack of or weak government presence. Forest cross border discussion panels should be put in place so that the private sector and national organizations can get together and design strategies and actions to promote legal trade in their territories.
The role of communities is vital to develop monitoring, control, and surveillance systems, taking advantage of the experience of many communities, which have traditionally played this role in their territories. Max Silva Sánchez, a Shipibo Konibo native and legal advisor to the Asociación Interétnica de Desarrollo de la Selva Peruana (AIDESEP), says that “communities must take part in forest management, to attain sustainable forest use.”
This capacity building exercise poses two challenges: on one hand, communities may take this responsibility in their territories, and on the other, governments may strengthen the technical and organizational capacity of their communities. “The challenge lies not only in that communities and indigenous groups participate in controlling, monitoring and surveying but in communities taking responsibility for the forests, as owners and holders of the right to use them. But this depends on their capacity being strengthened,” say Ronaldo Vargas, technical manager of the Bolivian Asociación Forestal Indígena Nacional (AFIN), and Estefanía Arias, director of the Bosques del Ministerio del Ambiente, Agua y Transición Ecológia (MAATE), a Bolivian agency.

Lack of trust in government agencies is another great limitation of local communities to monitor, control and survey their territories and to participate in the multi-actor consultation platforms. Strategies for communities to strengthen their relationships with government agencies and environmental authorities in their territories should be developed. Fabiola Muñoz, coordinator of the Peruvian Grupo de Trabajo de Gobernadores para el Clima y los Bosques (GCF Task Force) believes that ¨collaborative work requires trust.¨ In her opinion, “you devote time because you really feel the space is trustworthy. For that reason, it is important to make these spaces institutional so that they do not depend on the authority being in office.”

For webinar access you can check the following links: 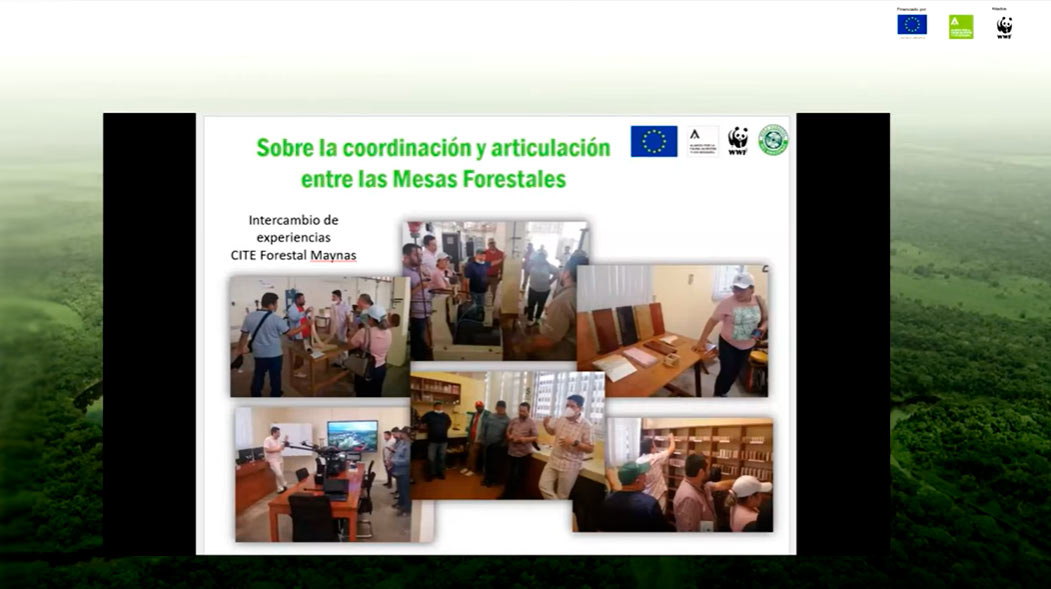 What could countries do to continue combating illegal timber trafficking?

Iquitos and Pucallpa: More than 350 citizens participated in cultural events