Why does the Mahi-Mahi need an ROP?

Nowadays, the Mahi Mahi (Coryphaena hippurus) is the second most important artisanal fishery in Peru, represents about 50% of its landings worldwide, generates exports of approximately 100 million dollars annually, more than 40 thousand jobs throughout of the productive chain (extraction, transportation, processing and commercialization) and involves more than 10 thousand artisanal fishermen. This fishery is in the top 5 for domestic consumption and around 79% of its exports are directed to the United States, although the Mahi Mahi fishery has a minimum size of 70 cm at the fork (RM N ° 249-2011- PRODUCE) and a fishing season between October and April (RM N ° 245-2014-PRODUCE),

What is a ROP?

It is a tool approved by the Ministry of Production (PRODUCE) that establishes principles, standards and regulatory measures based on biological, economic and social information. With its implementation and compliance, it will contribute to the sustainability and conservation of this resource, and obtain maximum economic benefits.

Why is it important?

It is important to ensure sustainability to prevent Mahi Mahi populations from decreasing and thus not risking its exports. Currently, Monterey Bay Aquarium Seafood Watch recommends to US consumers the Ecuadorian Mahi Mahi as a “good alternative”, while recommending them to “avoid” the Peruvian one, since our rating on management measures that ensure the sustainability of the resource is low.

It is even more important to regulate the access and conservation of the resource because IMARPE has considered the  Mahi Mahi as a fully exploited resource, which means that the maximum sustainable yield has been reached at its level of exploitation and therefore no new players can enter the fishery.

The idea of a ROP for the Mahi Mahi fishery is not new. Since the National Action Plan for the Conservation and Management of the Perico resource in Peru (PAN-Perico) (RVM N ° 81-2016-PRODUCE / DVPA) was approved in 2016, its elaboration is awaiting. Likewise, there is a strong demand from international markets for countries to ensure the sustainability of the fisheries that they supply, especially the United States, where 79% of Peruvian parakeet exports go.

What benefits could bring the publication of the Mahi Mahi ROP?

If the ROP of the Mahi Mahi is published, the following economic, social and environmental benefits will be obtained:

Who will be benefited?

The main beneficiary of the ROP is the artisanal fishermen who are dedicated to the Mahi Mahi fishery, as they seek to  conserve the resource in order to  obtain greater economic and social benefits for them through the definition of access conditions, conservation measures of the resource and the sustainable development of the activity, reinforcing and promoting research, as well as control, supervision and inspection measures.

It is said that the "Mahi Mahi ROP will benefit industrial fishing" or that it "contemplates the granting of fishing rights to the (larger-scale) industrial fleet". On this, below we explain why the ROP refers in its text to larger-scale vessels:

The Mahi Mahi fishery is characterized by being developed mainly by the artisanal fishing fleet. However, there are 7 larger-scale vessels that have a valid fishing permit to extract this species and some smaller-scale ones. These vessels were legally licensed several years ago and since it is a given right, they cannot be arbitrarily overridden because it would be illegal.

For this reason, the ROP mentions larger-scale vessels in its text, but this is subject to these 7 vessels complying with the measures established by the ROP. Likewise, this does not mean that other larger and smaller scale vessels will be given access to the Mahi Mahi fishery, since it is a closed regime. This means that new actors are not allowed to enter the fishery of those already fully identified. The ROP does not allow the increase of the fleet and considers only the use of surface spinner and hook.

Despite this, it is important to ensure that the current fishing effort being exerted on the Mahi Mahi resource is the same as before the ROP was published, given its current level of exploitation (fully exploited). This will correspond to be determined by the PRODUCE according to the mechanism contemplated in the Regulation of the General Fishing Law on the validity of the fishing permit.

The commitment to a transparent and participatory process

PRODUCE, with the support of WWF, organized  5 decentralized and participatory workshops to share a preliminary proposal of the ROP project for Mahi Mahi in order to collect contributions and suggestions from the main stakeholders involved along the value chain of this fishery. It was especially sought to collect the comments of artisanal fishermen from the North, Center and South of the country, that is why representatives of 28 Social Organizations of Artisanal Fishermen (OSPAS) were invited. 182 people participated in the workshops, with whom the objectives and main points of the ROP were reviewed:

It should be noted that the process is not over yet, since PRODUCE has just pre-published the ROP proposal and citizens have the opportunity to send their comments, suggestions and opinions. This pre-publication is the opportunity for everyone involved in the fishery to be part of the construction of the ROP and to have their voice heard.

What role has WWF played in this process?

Since 2013, WWF has been promoting the sustainability of the Mahi Mahi resource together with artisanal fishermen and processing plants. In this sense, it coordinates the implementation of a Fisheries Improvement Project (PROME or FIP) for the mahi mahi fishery in order to achieve MSC certification. Therefore, considering the importance of the ROP for the sustainability of the fishery, WWF has offered its technical support to PRODUCE by providing recommendations and promoting that the ROP be prepared in a participatory and transparent manner with all its stakeholders, so that it can be know the importance and participate in the construction of your content. 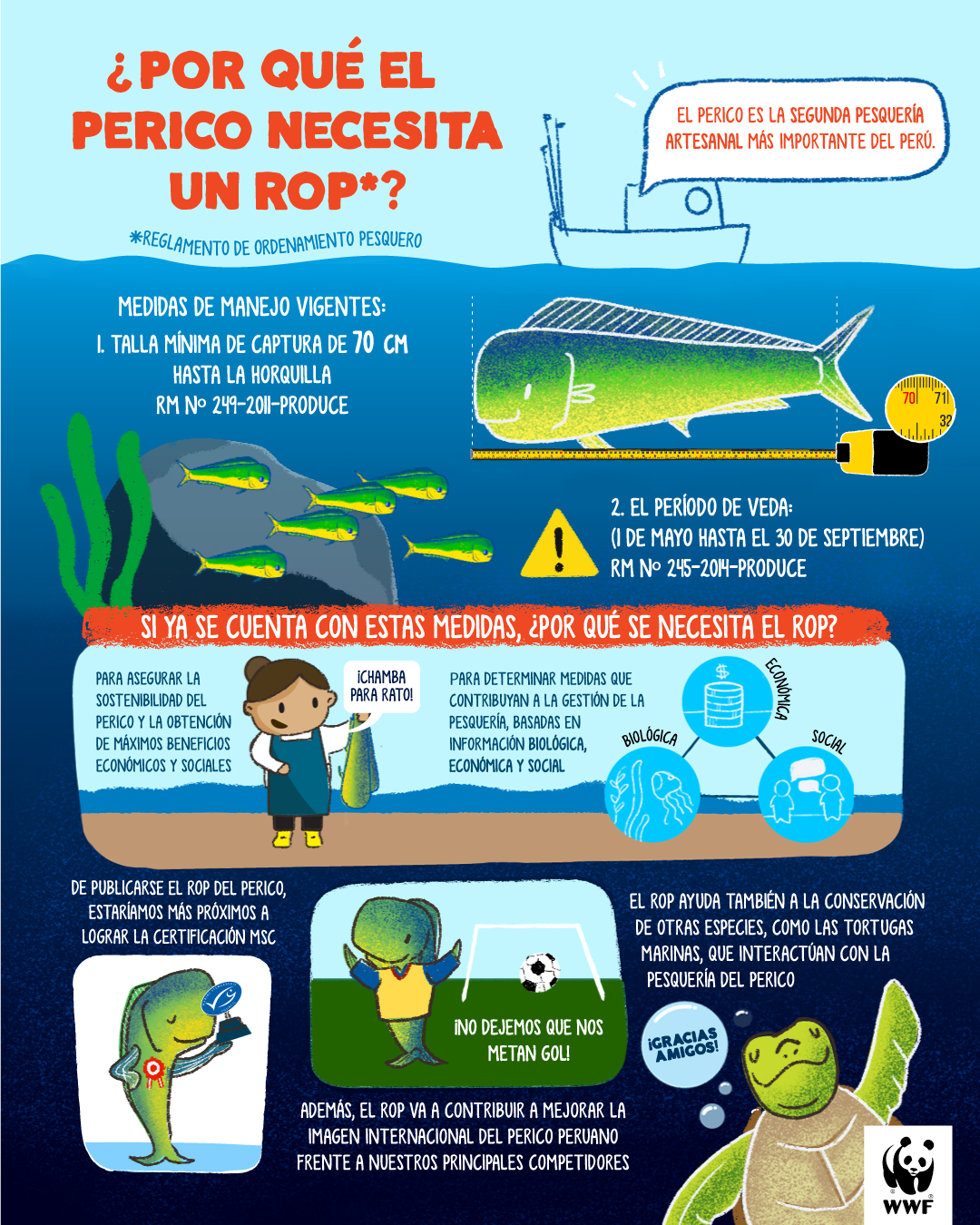 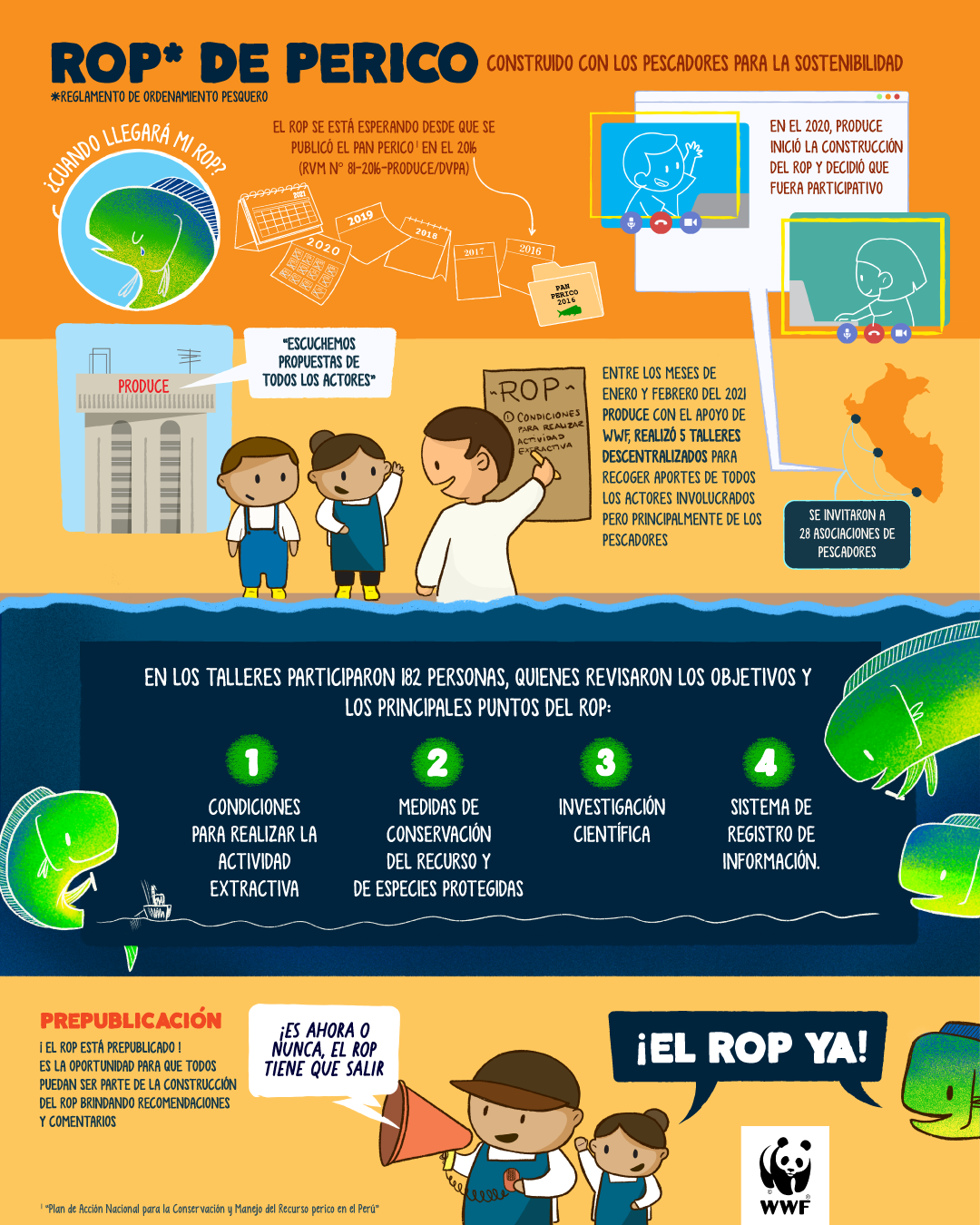 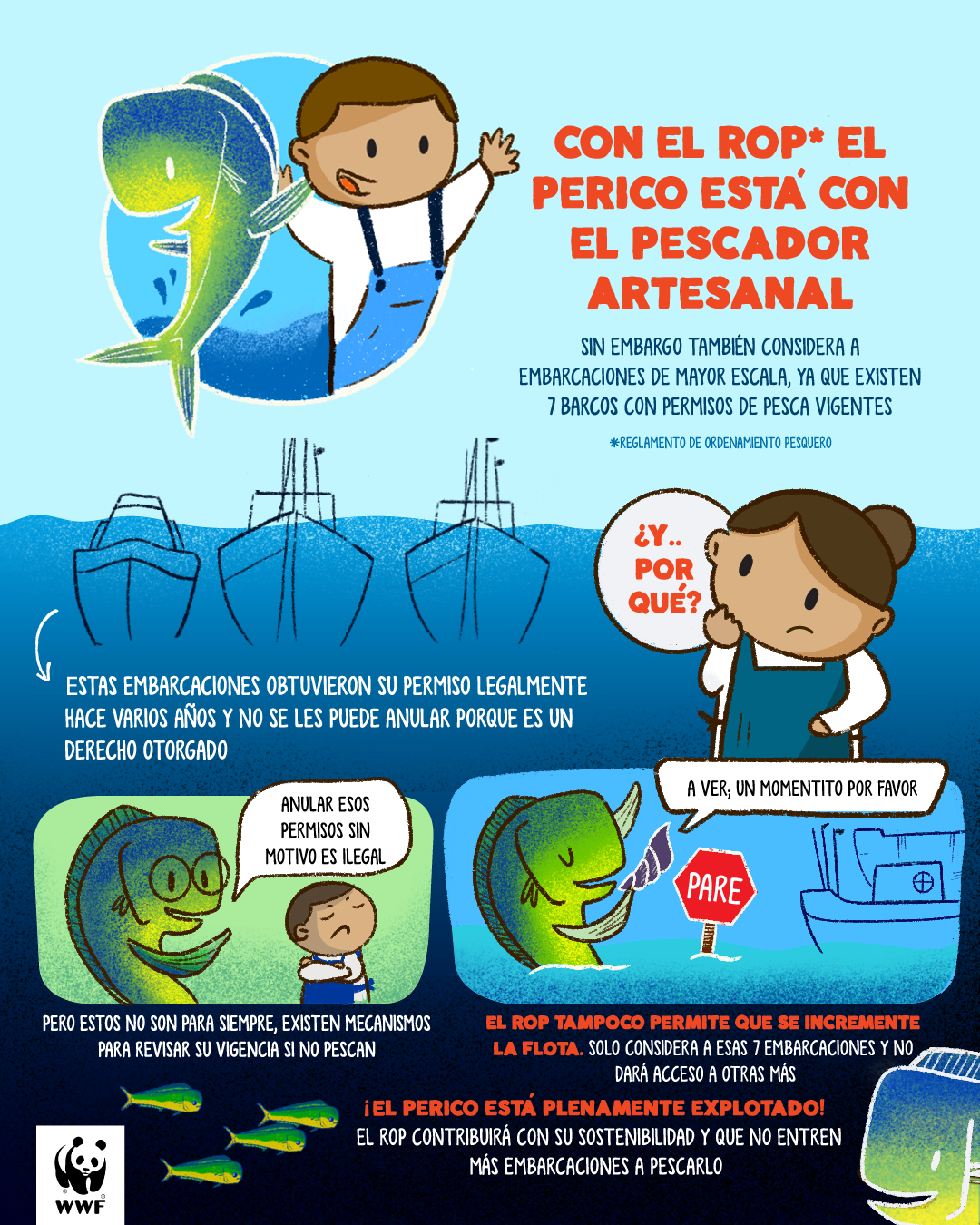 “DGM Saweto”: The Indigenous People’s battle for the leadership of their own destiny

The moment to act for the environment: Is Now